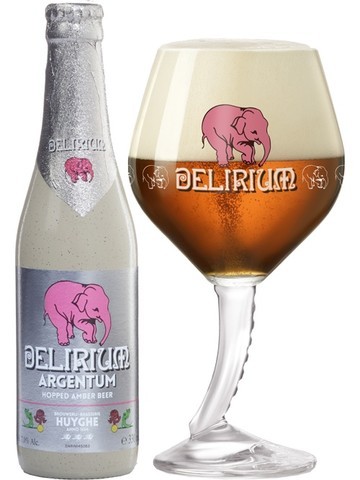 Belgian beer as an anniversary edition of the Delirum beers from the Huyghe brewery with extra hops added as IPA.

History of the Delirium Argentum beer

The region of Flanders in Belgium is steeped in tradition and at the same time open to new ideas. Originally founded in 1906 by Léon Huyghe in an inn in the small town of Appelhoek, beer has been brewed over the decades, although sometimes unofficially. In the meantime, a wide range of brewers are brewing in the city of Melle.

In 1997 the Delirium Tremens beer was brewed for the first time and in the same year it was nominated for the best beer in the world. A considerable range of beers has developed from this to this day. The symbol of this beer has become the pink elephant, which decorates all beers of the Delirium range.

Delirium Argentum was brewed for the 25th anniversary and the name already says that this beer is of particularly high quality, because 'Argentum' means 'silver' in Latin.