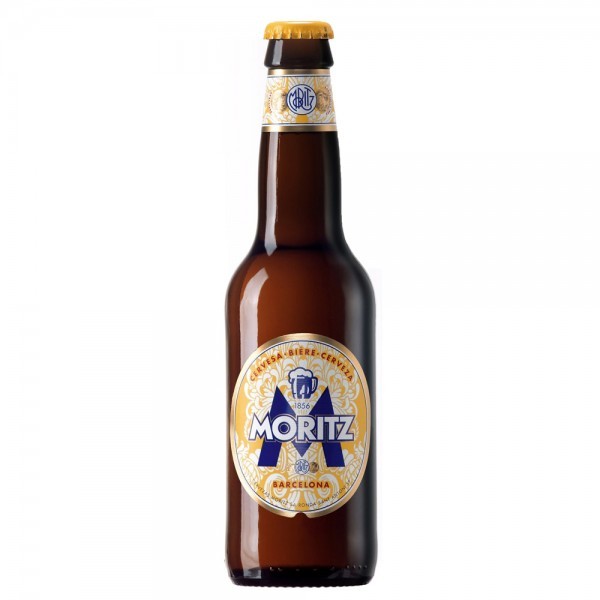 Moritz Barcelona 330 ml / 5.4 % Spanien The Catalans came early to enjoy German beer. In 1851, a young fellow named Louis Moritz Trautmann made from Alsatian Pfaffenhofen on the way to the distant Barcelona. Barcelona began precisely in...

The Catalans came early to enjoy German beer. In 1851, a young fellow named Louis Moritz Trautmann made from Alsatian Pfaffenhofen on the way to the distant Barcelona.

Barcelona began precisely in these years to develop industrially. The Raval area near the Rambla Trautmann found a small factory that he purchased and goal for the following years to a large brewery.

Late 19th century was Moritz beer is the leading brand in Barcelona; for the World Expo in 1888 won the beer even a gold medal. Advertising has always been designed already by the best contemporary artists, an exhibition at the house occupied this. 1978 production, however, was then adjusted to the oil crisis.

The reintroduction in 2004 was carried out timidly. Meanwhile Moritz has become in Barcelona cult beer, the brewery supplies its beers to mainland Spain and in 15 other countries. The annual growth rates amount to 30 to 40 percent, the annual production is around 10 million liters!

Compared to the Spanish Beer Giant Estrella, San Miguel or Cruzcampo Moritz occupied rather niche for gourmets. This is also reflected in price, because a bottle Moritz costs almost twice as much as a bottle of competitors.

Water plays a crucial role in Moritz: it comes from the source of Montseny-Guilleries, which belongs to the company Vichy Catalán. Other Spanish beers are brewed with normal tap water. Moreover Moritz beer is flavored with hops from the Czech Saaz, which has a mild flavor result. Other raw materials of the cult beer are rice and malt.