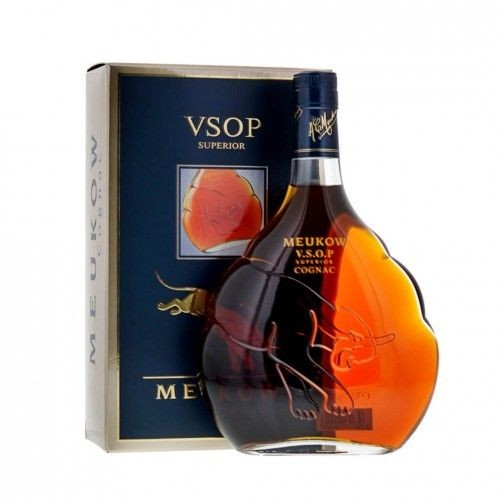 Meukow V.S.O.P Superior  Cognac 70 cl / 40 % Frankreich The Meukow VSOP Cognac is a double distilled and multiple award-winning cognac of the category "Very Superior Old Pale", which is normally matured for at least four years in oak...

Alkohol:
Ja
This product is currently not available.
CHF69.00 *

The Meukow VSOP Cognac is a double distilled and multiple award-winning cognac of the category "Very Superior Old Pale", which is normally matured for at least four years in oak barrels conditioned by the Charent. Meukow has allowed this blend to mature for an extra year to intensify the aromas.

On August 1, 1862, the two Silesian brothers Auguste-Christophe and Gustave Meukow founded the cognac company Meukow & Co after being sent to France by the Russian Tsar Alexander II to supply the Russian Tsar's house with high-quality cognac. By 1900 they already owned some of the largest cellars in France and exported their cognac to almost every country in the world. In 1979, the company was taken over by CDG and became the fifth largest cognac distributor in the world. The use of Ugni Blanc vines, harvested from the first week of October onwards, and the storage in their cellars near the Charent ensure the high quality of their cognacs. The copper stills and the high-quality wood of the white oak barrels are decisive for the Meukow cognacs. The long experience of the cellar masters and their blending skills result in the multiple award-winning Meukow cognacs, which carry a panther on their bottle.