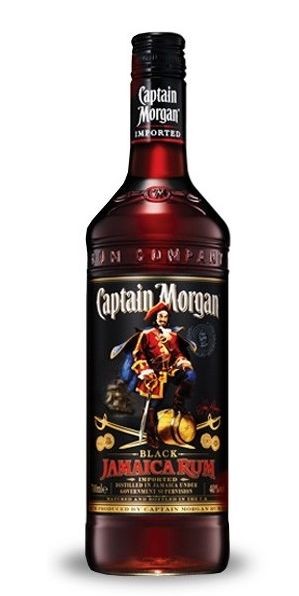 Captain Morgan BLACK JAMAICA 70 cl / 40 % Karibik In 1654 the young Henry Morgan left his native Wales and set off for the Caribbean Islands. He never regretted it. A born leader, he quickly worked his way up to captain and became famous as a...

This product is currently not available.
CHF39.00 *

In 1654 the young Henry Morgan left his native Wales and set off for the Caribbean Islands. He never regretted it. A born leader, he quickly worked his way up to captain and became famous as a privateer. He defended British interests and made the Caribbean unsafe. Centuries later, he became the symbol of a company that would become as famous as he was ... the Captain Morgan Rum Company.
Bourbon barrels of American white oak are used, which are burnt out and filled with triple distilled rum. Then they let it rest and mature. The burnt-out barrels play an important role in shaping the rum aroma and help release the vanillin, tannin and caramel sugar aromas. Aging in these barrels also softens the taste and gives the rum the full golden color characteristic of these products.
Captain Morgan is a rum with an important depth of flavors, which ages in oak barrels and has a dark color, with a lot of body and a delicious, different taste, resulting in a distinctive character.

Appearance
Dark, copper-gold color.
Odour
Aromas of liquorice with a spicy touch and caramelized sugar.
Taste
This rum offers a great depth of flavor under which a fantastic sweetness and a hint of molasses can be found. Very soft and delicious in its taste.