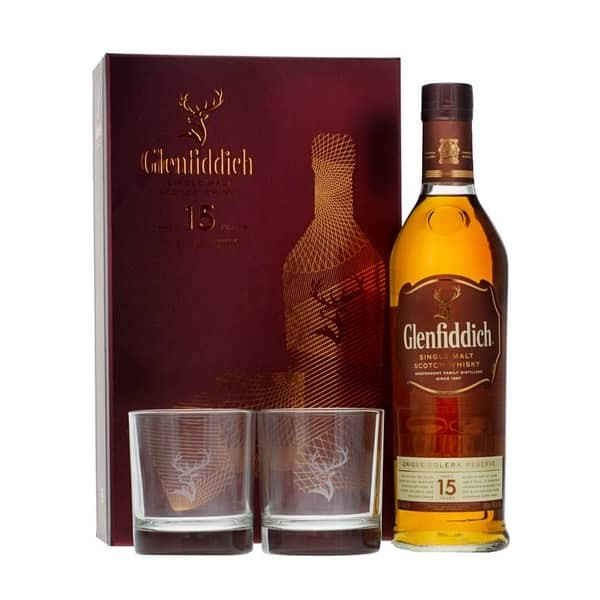 Glenfiddich 15 Single Malt Scotch Whisky SET mit 2 Gläser 70 cl / 40 % Schottland For this Glenfiddich edition, whiskeys of different Fassreifungen are married in a single solerafass made of pine wood. In 1886, William Grant opened his...

For this Glenfiddich edition, whiskeys of different Fassreifungen are married in a single solerafass made of pine wood.

In 1886, William Grant opened his distillery, which he had previously built with the help of his family and with the help of an architect himself. Only a few years later, in 1898, the first problems arose: The largest customer of Grant's Whiskeys, the Patisson company, went bankrupt. But giving up was not an option at Glenfiddich and so the effort finally paid off. Today, Glendfiddich has long been one of the best-known single malts in the world. The "Glenfiddich 15 Years" is based on the solera process of different whiskeys with different Fassreifungen - Oloroso sherry, bourbon, new oak barrels - made. He was finally married and stored in a special solerafass made from Oregon pinewood.