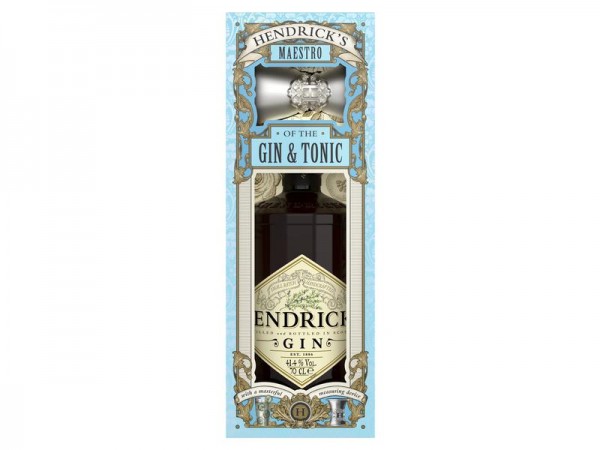 HENDRICK's Gin Geschenkset mit JIGGER 70 cl / 41.4 % Schottland The Hendrick's Gin is something special. Say your inventor William Grant & Sons, which are actually better known for a good whiskey. They promise there even with slogans such...

The Hendrick's Gin is something special. Say your inventor William Grant & Sons, which are actually better known for a good whiskey. They promise there even with slogans such as "It's not for everyone" who even decorates the back of the bottle. Just with a little dry humor of the slogan "Preferred by 1 out of 1000 Gin drinkers". Even more, you can find 2 characteristic components of Gins: roses and cucumbers.

Again, particularly, of Hendricks gin which is produced mainly by hand since 1999, working with a very own production. The basis of gin are 2 different distillates: One in a pot still Bennet (pot still) distillation, a in a "Carter-Head pot still". These two are then mixed. The cucumbers and roses come afterwards added as essence. Thus, the Hendricks Gin becomes a "destilled gin".