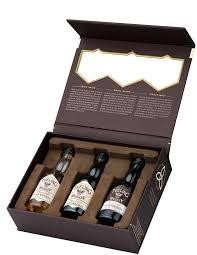 Teeling Whiskey Trinity Pack 3 x 5 cl Single Grain, Small Batch, Single Malt The Spirit of Dublin Dublin has been the heart of the Irish whiskey industry for almost two centuries. In the golden age of Irish Whiskey in the 19th century, the...

The Spirit of Dublin
Dublin has been the heart of the Irish whiskey industry for almost two centuries. In the golden age of Irish Whiskey in the 19th century, the distilleries in the area called "The Liberties" in the southwest of the city were not only the country's most important distilleries, they were among the most important in the world. From Dublin, the legendary Irish whiskey reached all oceans.

The Teeling family
In 1782 Walter Teeling opened the first own distillery of the family Teeling in the Marrowbone Lane in the Liberties. Since then, teelings have been one of the driving forces of the Irish whiskey industry. At the beginning of the 20th century, Irish Whiskey was hit by numerous blows, which meant that at the beginning of the 1970s, unfortunately, the last whiskey distillery in Dublin had to close.
More than 50 years later, Irish whiskey production is back in Dublin. In 2015, the Teeling family opened a craft distillery in the Dublin Liberties to bring whiskey production back to the Irish capital. Rising Phoenix rising from the pot still, gracing every bottle of Teeling Small Batch Irish Whiskey, symbolizes this new beginning.