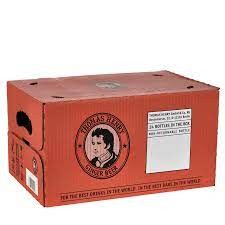 Thomas Henry Spicy Ginger Kiste 24 x 20 cl Deutschland The spiciest of all sodas. Under the name "Ginger Beer" we know the hot and spicy ginger lemonade all over the world, which we made by Thomas Henry as the first in Germany. "Beer"...

The spiciest of all sodas.

Under the name "Ginger Beer" we know the hot and spicy ginger lemonade all over the world, which we made by Thomas Henry as the first in Germany. "Beer" because it was originally brewed like a beer. Especially in America and England, where it was invented in the 19th century, people appreciated the savory, refreshing taste. They do - rightly so - even today, where they are no longer produced in the brewing process. To ensure that there is no misunderstanding in the land of the purity law, our product is called Thomas Henry Spicy Ginger. Fits better too: Spicy is indeed, and Ginger is in neat. But no beer and no alcohol. The only comes when our Thomas Henry Spicy Ginger with gin, rum or other spirits is married to delicious drinks.
The full load of ginger.

Strong and surprisingly sharp: That's Thomas Henry Spicy Ginger. All over the world you can appreciate the distinctly spicy taste of "Ginger Beer", pure and in long drinks such as the Moscow Mule with vodka or the Dark'n'Stormy with rum. The first German-made ginger lemonade modeled on the English "Ginger Beer "is a sensory refreshment of a special kind. More ginger, more sharpness.