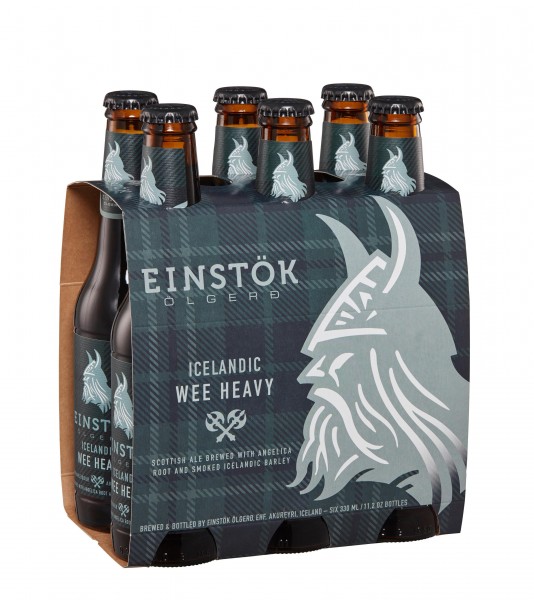 EINSTÖK Icelandic Wee Heavy Scotch Ale Kiste 24 x 330 ml / 8 % Island The history of the Vikings goes back thousands of years not only in Iceland, but also in Scotland. To follow in the footsteps of his ancestors, one of Einstök's brewmasters...

The history of the Vikings goes back thousands of years not only in Iceland, but also in Scotland. To follow in the footsteps of his ancestors, one of Einstök's brewmasters studied in the Scottish capital of Edinburgh and, of course, took the opportunity to take a close look at Scottish beers. Not surprisingly, Einstök has now added an Icelandic Scotch Ale to its portfolio, brewed with barley malt roasted over birch wood. A special ingredient added to the beer by the Vikings is the hand-picked Icelandic angelica root, which was even considered currency at the time and gives the Wee Heavy its special spiciness. The result is a strong Scotch Ale with 8.0% alcohol by volume and a creamy, spicy character.

In the glass, the Einstök Wee Heavy presents itself in a dark chestnut red and is decorated by a beige foam crown. On the nose, a sweetly malty and slightly smoky aroma is immediately perceptible, bringing with it notes of caramel, cocoa and nuts. The forward finish is quite creamy, also pleasantly sweet, and is full of roasted malt flavors and notes of chocolate and dried red fruits. Pleasantly spicy and still easy to drink for the high alcohol content.
ALLERGENE NOTE: Barley malt