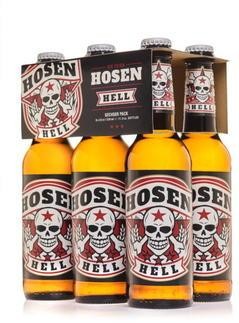 30 centimes depot included in the price Old Town. Altbier. The dead pants. Dusseldorf. Clear thing, you might think. But now the band comes with their own beer: Hosen Hell. Does music history have to be rewritten? Of course not! Because the...

Alkohol:
Ja
This product is currently not available.
Please inform me as soon as the product is available again.
CHF3.90 *

30 centimes depot included in the price

Old Town. Altbier. The dead pants. Dusseldorf. Clear thing, you might think. But now the band comes with their own beer: Hosen Hell. Does music history have to be rewritten? Of course not! Because the matter is quite simple and of course has its roots in the old town of Dusseldorf. In the brewery Uerige, as the boys tell about the genesis of Hosen Hell: "For many years we have been friends with the Schnitzler family, who have been cultivating this traditional brewery for several generations. We have co-operated many office and after-show parties and supported each other wherever possible.

The beer is initially available here in the band's own online shop and will be available in Dusseldorf via the Uerige in the Old Town. Of course there are the pants Hell in the bar!

At some point asked Michael Schnitzler, who had taken over the house a few years ago from his father, if we could not imagine together to brew their own beer. We were immediately enthusiastic, but then recognized a problem: The best Altbier exists with the 'Uerige' already! Therefore, this brewing variant unfortunately retired. For a long time people were thinking about how to find a suitable solution. Finally, in the summer of 2017, Michael introduced us to his friend Dr. Fritz Briem and we were very sympathetic from the start: Like the Uerige team, a brewing madman whose family has been producing and delivering the hops for ages, brewing 'Tasty Dröppke' in the old town, picture book bayer and globetrotter. Here, worlds collided, and so came together what belonged together, because Fritz was the first to suggest that he try the trouser beer with another, but no less classic, brew form than old: The idea for the pants was Hell born! In the next few months then followed various test runs, until it came to the big showdown last December in the Munich Olympiahalle: The Toten Hosen and all friends faced the final Testsabfüllungen the Hosen Hell with various flavors and had now finally for one Decide variant. This tasting lasted until the early morning ... Over the next few months we worked on refining the brewing results, so that we could finally start the race. "