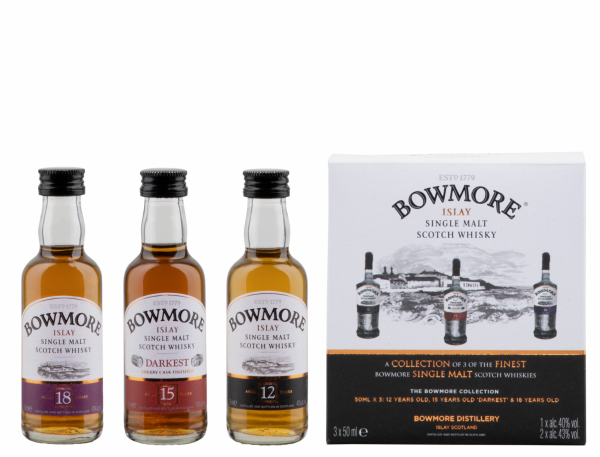 Islay's oldest distillery Bowmore was founded in 1779 and is thus also one of the oldest in the whole of Scotland. Today, it belongs to the Beam-Suntory Group. The distillery's own malt house is a special feature. No other distillery produces and uses as much of its own malt for its whiskies as Bowmore. Also special is a warehouse converted into a swimming pool, which is heated with the heat generated by production. Bowmore Distillery is known for its preference to store their whiskeys in sherry butts. Legendary, for example, the single malt Black Bowmore, one of the most sought after and expensive bottlings in the whiskey world.
Since the selection and use of the barrels is very different, here is not only the age Massgebend but the complexity and taste of wood type is strongly influenced. Exciting set to get to know the core range of Bowmore.
ABOUT BOWMORE
The first legal whisky distillery on the island of Islay, founded in 1779, and one of the oldest in Scotland. Since 1994, the distillery has been owned by the Japanese company Suntory. It has its own malt floors. Visitor center worth seeing.