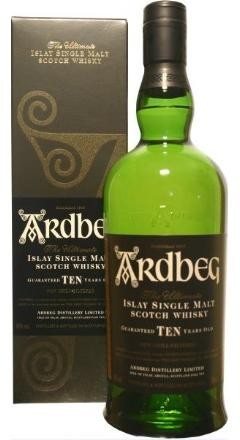 ARDBEG 10 Years Islay Single Malt Scotch Whiskey 70 cl / 46% Scotland Ardbeg 10 years is one of the most famous single malts and is an absolute must for every fan of Islay. No whiskey embodies the mystical character of the island better...

Ardbeg 10 years is one of the most famous single malts and is an absolute must for every fan of Islay. No whiskey embodies the mystical character of the island better than Ardbeg with its particularly high peat content. On the rugged banks of the southern part of Islay is the distillery Ardbeg. She prides herself on her private source - the water used by Loch Uigeadail is soft and pure. Nose: Smoky, salt water, iodine-like dryness Taste: Its balanced and deep aroma is characterized by a bewitching blend of caramel, sweet chocolate, cinnamon and phenolic notes. After initial sweetness, intense peat notes quickly develop with hints of tobacco smoke and espresso. Finish: Strong, with lots of iodine

The distillery Ardbeg was founded in 1815, where previously Schwarzbrenner had done their work. In 1817, two years after its founding, it passed into the family estate of the McDougall family and was not handed over to Hiram Walker as a new owner until 1977. This closed the distillery 4 years later. In 1989, thanks to the new owner Allied, it went into operation for a further 7 years, but without malting. Glenmorangie plc saved the jewel in 1997, had the building renovated and then went back into production. Fortunately, the change in ownership of Glenmorangie to Moët Hennessy has not yet had a major impact, except for management changes on the top carpet level.