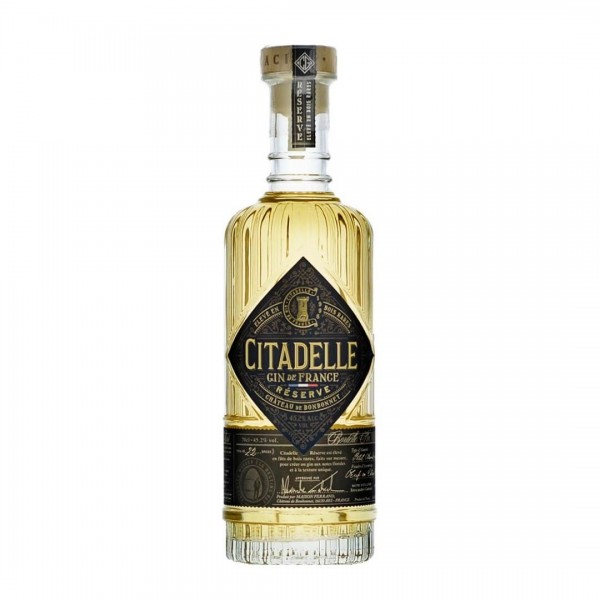 Ordered online, conveniently delivered to your home
Description Evaluations 1
Description
Citadelle Gin Reserve 70cl / 44% France Citadelle Gin Reserve is an extremely elegant and... more
Close menu
Citadelle Gin Reserve 70cl / 44% France
Citadelle Gin Reserve is an extremely elegant and balanced gin from the region of Cognac, the mature in small oak barrels. The gin made with 19 botanicals has through the barrel aging a delicate vanilla flavor and distinct notes of citrus, cinnamon and juniper. May I know!
Owner Alexandre Gabriel decided in 1998 to produce its own gin. It was important to him that its product can have a French history. After several years of searching finally found Monsieur Gabriel a gin recipe in an old distillery in the French port city of Dunkirk (fr. Dunkerque). Dunkirk was for centuries the first port for returning from the East transit point for sailors and an abundance of spices and aromatic herbs. For this reason, the two famous master distiller Carpeau and Stival had the idea to build an own distillery here. In 1775 they received schlieslich of King Louis XVI. the necessary internal rights and opened its distillery in the famous "Citadelle", the protective fortress of the city. Monsieur Gabriel finally succeeded the original recipe of Carpeau and Stival to locate, after the Citadelle Gin is produced today. The Citadelle Reserve Gin is the only gin in the world that is after the cognac method, ie in small Charentais pot stills distilled. The starting material for the Citadelle Gin Reserve is wheat from the Beauce region, which with pure spring water from Angeac / Cognac is mixed and is fermented with the addition of a special yeast strain. After fermentation, the mash is triply distilled. The very pure and neutral alcohol will eventually 19 different herbs and spices are added, which are later responsible for the flavor of Citadelle Gin Reserve. As Botanicals among other almonds and lemon peel from Spain, cinnamon from Sri Lanka, licorice from China, Kubebenpfeffer from Java, grains of paradise from West Africa and juniper and violet are used in France. After macerating the botanicals of Citadelle Gin Reserve is distilled for a fourth time and then decanted for about 6 months in lightly toasted small French oak barrels that previously contained cognac. This particular type of storage of Citadelle Gin Reserve gets its beautiful pale golden color and incomparable aroma.
Evaluations 1
Read, write and discuss reviews... more
Close menu
Customer evaluation for "Citadelle Reserve Gin 70 cl / 44 % Frankreich"
From: Anonymous On: 8 Jul 2016