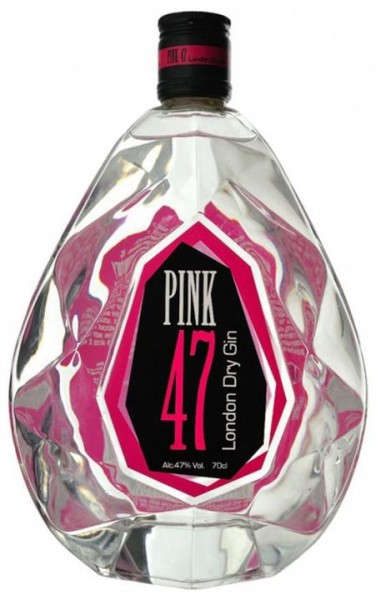 PINK 47 London Dry Gin 70 cl / 47 % UK Manufactured by G & J Greenall distillery in Warrington, Cheshire. The first distillation of gin were brought G & J Greenall in 1761 to market and it is the most prestigious Porduzenten and...

Ordered online, conveniently delivered to your home
Description Evaluations 0
Description
PINK 47 London Dry Gin 70 cl / 47 % UK Manufactured by G & J Greenall distillery in... more
Close menu
PINK 47 London Dry Gin 70 cl / 47 % UK
Manufactured by G & J Greenall distillery in Warrington, Cheshire. The first distillation of gin were brought G & J Greenall in 1761 to market and it is the most prestigious Porduzenten and bottlers as well as for the famous brand Bombay Sapphire. Ms. Joanne Simcock is considered Master Distiller at the distillery and the first and only woman in England who has dealt with the production of gin. Their dedication and creativity made the product PINK GIN 47 outstanding.
Pink 47 is enriched with 12 Botanicals, followed by 4 careful distillations in so-called "pot stills". The basis for production are the juniper berries from Tuscany. There are also two different types of Angelica, including one from Saxony, Moroccan coriander, lemon and orange peel from Spain, orris root from Italy, licorice from China, almonds from Spain, spice bark from Indochina, Kubebenpfeffer from Java and West African nutmeg.
Often forgotten, but not insignificant for the quality of the distillate are two other factors. Firstly, it is the height of the distillery, which has influence on the character of the distillation process due to the boiling point. The Distillery Warrington is located just 28 meters above sea level. Secondly - and more importantly - the quality of the water. Because after the fourth distillation of the fire is reduced by a non-edible alcohol strength of 70 vol .-% with water to 47 vol .-%. The water that is used for PINK 47, comes from the River Dee, which rises in the Snowdonia National Park in mid-Wales, the filtering and cleaning of gin is very specifically carried out so that it does not lose its character.
This gin was nominated with several international awards.
Silver Medal - International Spirits Challenge of 2007.
Commended - Bartenders Challenge of 2007.
UK Spirits Winner - Tesco Drinks Awards 2008
Platinum Award Winner of the 2011 - World Spirits Competition
Evaluations 0
Read, write and discuss reviews... more
Close menu
Customer evaluation for "PINK 47 London Dry Gin 70 cl / 47 % UK"
Write an evaluation
Evaluations will be activated after verification.