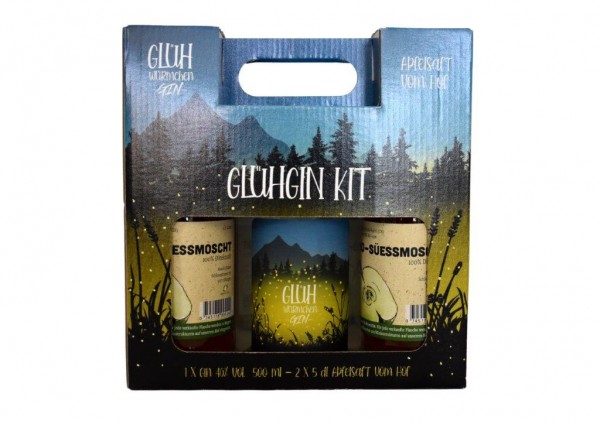 GLÜHGIN KIT mit GLÜH Würmchen Gin inkl. 2 x 50 cl Bio Apfelsaft plus Gin 50 cl / 40 % Schweiz Kit consisting of 1x Glühwürmchen Gin (40% vol.) and 2x 5dl apple juice from the farm. Once upon a time there were three pixies who could not be...

Once upon a time there were three pixies who could not be more different. The first elf loved his gold coins. The second elf was completely infatuated with goods from near and far. And the third elf constructed whimsical apparatuses. And despite their differences, the elves were united by a deep friendship. And so it came about that the friends ran a grocery store together, selling all kinds of beautiful and curious things. And when it snowed in the small town of Basel and Christmas was just around the corner, they opened their store with all sorts of things from all over the world. Legend has it that the three elves always drank a warm wine with the finest ingredients from large jugs during this frosty time. Glowing wine was the name of the brew. So days and years went by - until one particularly foggy evening a caravan from the Orient passed by. The merchants from the Orient had a special treasure with them. The recipe for an even more aromatic hot drink. The legend tells that this tincture comes from the genies, also called gins, themselves. The three gnomes wrestled the fabled recipe from the merchants for a few bucks and immediately set about brewing it. They painstakingly gathered the rare ingredients. Secret ingredients that can only be found when the fireflies perform their dance under the apple trees. The pixies mixed their magic potion in a large copper cauldron. From then on, the cups were filled with firefly gin.