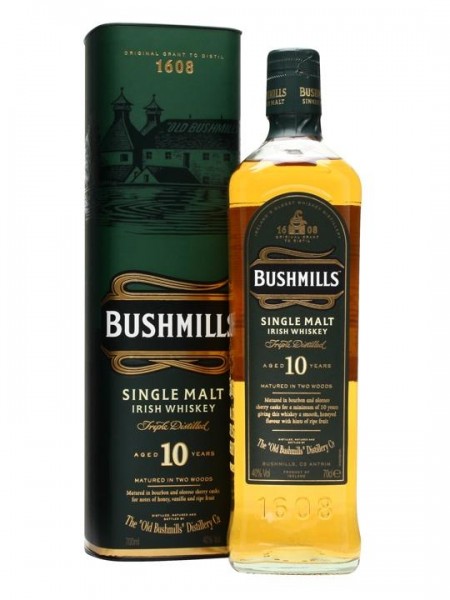 Bushmills 10 years of single malt Irish Whiskey is the flagship of the "Old Bushmills Distillery", the oldest licensed whiskey distillery in the world. As the name suggests, the BUSHMILLS Irish Single Malt is a pure malt whiskey, using only the...

Bushmills 10 years of single malt Irish Whiskey is the flagship of the "Old Bushmills Distillery", the oldest licensed whiskey distillery in the world. As the name suggests, the BUSHMILLS Irish Single Malt is a pure malt whiskey, using only the finest natural raw materials According to ancient tradition, this single malt is burnt in copper stills (pot stills) and aged for at least 10 years in specially selected barrels of American oak and Spanish Oloros.Bushmills 10 years of single malt whiskey convinced by its mildness and smoothness. It has a sweet, powerful aroma, accentuated by sherry, vanilla and honey notes. Its malty taste ends in a pleasingly long and slightly dry finish.

In 1608, Sir Thomas Philips was given official permission by His Majesty King James I to burn in the area around Bushmills on the north coast of County Antrim in Northern Ireland Whiskey. Years before, according to the legend, the troops of Henry II had especially enjoyed the exquisite spirits of the region. In 1988, Bushmills came between the fronts, as the British giant Grand Metropolitan with its French rivals Pernod-Ricard began to fiercely struggle to take over the traditional Northern Ireland brand. The contract was finally won by the French. Bushmills has always been distilled three times, giving the whiskey a special, pleasantly pleasing lightness. In character, Bushmills Whiskey excels at a young age by a wonderful freshness and sweet-round spicy. Mature vintages, in addition to their characteristic clarity and freshness, have a fascinating full-bodied taste.