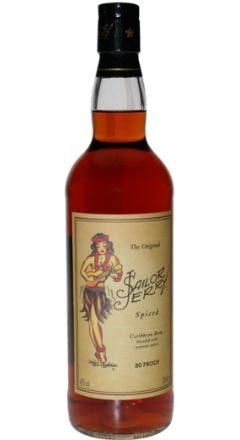 Sailor Jerry Spiced Rum is a dark, Caribbean rum flavored with natural flavors of vanilla and caramel and a hint of cinnamon and almond. Its fragrance carries a soft-spicy rum note balanced with vanilla and toffee.

It bears the name of the man Norman "Sailor Jerry" Collins (1911 - 1973), the father of the so-called old-school tattooing in America. He was considered a true visionary and as an independent artist, whose influence extends even to our days. He became famous during the Second World War, when he tattooed on Hawaii soldiers of US troops. He mixed for the first time the American with Asian style and so influenced an entire generation of tattoo artists and works up to the present. The Master Blender of Sailor Jerry Spiced Rum selected for this a combination of a series of high quality Caribbean rum and refined it with precious spices such as Vanilla, lime, clove, nutmeg and other spices.